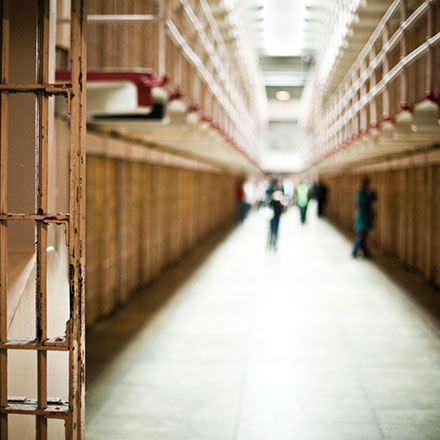 Warning: This story talks about topics that can be triggering. If you or someone you know needs help, please call, text, or chat the Suicide and Crisis Lifeline at 988. You matter. You are important.

With about one death by suicide reported every 11 minutes in the United States and an increased risk of suicide in individuals involved in the justice system, Michigan State University, Henry Ford Health, and Brown University have established the National Center for Health and Justice Integration for Suicide Prevention.

One in three men and one in eight women who died by suicide have spent at least one night in jail in their lifetimes.

The new suicide prevention research center, also known as NCHATS, is an innovative program funded by a $15 million grant from the National Institutes of Mental Health. The goal is to build information bridges between health care organizations and justice systems to identify individuals at risk for suicide and connect them to care.

“One of the main problems in suicide prevention is finding people at risk for suicide who are not well-connected to health care,” said Jennifer Johnson, Ph.D., a principal investigator on the grant and C. S. Mott Endowed Professor of Public Health at Michigan State University College of Human Medicine.

“It turns out that many such individuals are in contact with the justice system, including police, courts, and local jails. The challenge with connecting individuals in jail with community services is that it is resource-intensive and difficult to do at scale. Our approach solves both problems,” Johnson said.

Michigan State University, Henry Ford Health, and Brown University are home to the leading investigators in the research center and will guide and collaborate on research and pilot projects with ten other health care and higher education organizations.

“These teams bring together the country’s foremost experts to reduce the national suicide rate while establishing interdisciplinary approaches to connect hard-to-reach individuals to care,” said Aron Sousa, MD, FACP, dean of the MSU College of Human Medicine. “Public health efforts to identify gaps in care for vulnerable populations are critical to the health of our nation. Together, we can make a lasting difference.”

Additionally, the Henry Ford Health + Michigan State University Health Sciences partnership brings its power and knowledge to the effort. The goal of the partnership is to be a catalyst for change by reimagining how to innovate and deliver health care.

Brian Ahmedani, Ph.D., a principal investigator and director of the Center for Health Policy and Health Services Research and Psychiatric Research at Henry Ford Health, said he and his team are eager to incorporate Henry Ford’s internationally acclaimed suicide research and Zero Suicide prevention program.

“We know that sharing information between institutions is critical to saving the lives of these individuals.  This research could also become knowledge that could be applied to the general population, leading to even more lives saved by preventing suicides,” he said.

Justice-involved individuals also have high rates of other suicide risk factors, including mental health problems, substance use, financial challenges, loss of housing, relationship struggles, exposure to violence, and access to lethal means such as firearms, vehicles, or drugs. The justice system and police settings have limited mental health intervention capacity, and health systems are typically unaware of their patients’ justice involvement.

The new suicide prevention center will examine how to scale successful pilot projects and evaluate both the clinical and cost-effectiveness of suicide prevention activities, said Lauren Weinstock, Ph.D., Professor of Psychiatry and Human Behavior at Brown University and the third principal investigator on the grant.

“The COVID-19 pandemic and social justice movements of the past several years have brought significant attention to the multitude of inequities faced within the U.S., and particularly how these have contributed to disparities in those who come into contact with the criminal justice system,” Weinstock said.

NCHATS includes more than 100 stakeholders, 30 investigators, and 15 institutions. The center will use contact with the justice system (e.g., police contact, court involvement, arrest) as a novel indicator of suicide risk in the general population. The center will link big data systems that efficiently track publicly available data on justice involvement to health system records to identify individuals at risk for suicide and connect them to community care.

Even with the known risks, suicide prevention is not the top priority of most police and justice contacts. By bringing together jails, police, health systems/plans, judges and corrections, NCHATS will integrate and expand the public health response to suicide prevention.

“Amidst calls for decarceration and diversion to mental health and substance use treatment, we need systems in place to effectively identify those who are at greatest risk and connect them to services,” Weinstock said. “With the establishment of NCHATS, we aim to address the all-too-frequent problem in which vulnerable individuals find themselves ‘falling through the cracks’ between the health and justice systems and to connect people to needed care.”

The award includes funds for 15 institutions, including: