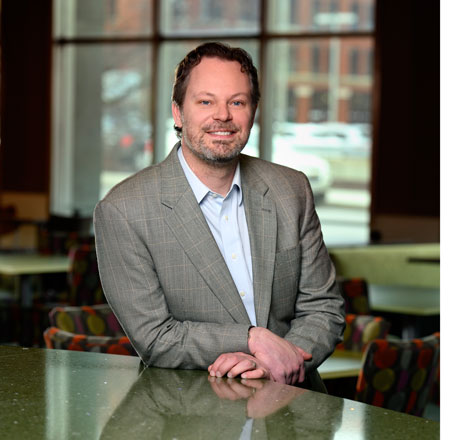 Colorectal cancer (CRC) is the third most common cancer type diagnosed in the United States in both men and women. The American Cancer Society estimates there will be nearly 150,000 new cases in 2021 and over 50,000 deaths. But CRC is preventable and very treatable if caught early. “Disparities in CRC screening have persisted in the African American community, but we have the tools to do something about it. If Black Lives Matter, then Black health should matter too,” Todd Lucas.

“When caught early, the five-year survival rate is over 90 percent,” said Todd Lucas, a C.S. Mott Endowed Professor of Public Health at Michigan State University. Yet, he points out that disparities in colorectal cancer screening in African Americans result in a higher death rate among that segment of the population. “African Americans don’t get screened for CRC as often as other groups, and when they do get screened, they don’t get screened as early.”

CRC mortality rates from 2014-2018 were over 35 percent higher for African Americans than for non-Hispanic whites.

“We’re living in a time where people are starting to recognize the broader social determinants of health,” Lucas said. “These social determinants also impact cancer screening among minorities and communities of color in this country—and have been for a very long time.”

Lucas and his research team will use a five-year, $1.7 million Research Scholar Grant from the American Cancer Society to study colorectal cancer screening and health equity. The primary goal is to build on a program of research centered around improving take-home CRC screening among African Americans as a route to achieving greater screening equity. The research team is partnering with two Federally Qualified Health Centers (FQHCs) in Michigan: The Wellness Plan in Detroit and the Genesee Community Health Center in Flint.

“We live in a pretty great day and age for CRC screening, in that you have choices,” said Lucas, principal investigator on the grant. “If you’re willing to go do a colonoscopy, that’s great. It’s an awesome screening tool. But some people aren’t willing to do that. They may prefer to do a different type of recommended screening. That’s okay too.”

Available options for take-home CRC screening include fecal immunochemical testing (FIT kits) and the newest tool—stool DNA testing, such as the Cologuard brand.

Another aim of the research is to encourage full utilization of take-home screening kits when they are provided. According to Lucas, many people who are given a take-home CRC screening test don’t complete and return it. In FQHCs that serve African American communities, completion and return rates may be 10-15 percent or lower.

The goal of Lucas’s team is to alleviate some of this disparity.

“Our focus is also on increasing conversion of take-home CRC screening options in African American communities,” Lucas said. “We will be evaluating whether adopting and tailoring an evidence-based ‘nudge’ can encourage full completion of take-home CRC kits.”

Since the mid-1980s, CRC rates have been rising in young adults ages 20-39; since the mid-1990s, in adults ages 40-54. Because of this, the American Cancer Society now recommends that CRC screening begins at age 45—rather than 50—and even younger if you have a family history of CRC or are experiencing symptoms.

Lucas’s team will be looking for 500 – 600 individuals between the ages of 45 to 70 who are due for recommended CRC screening to participate in their study.

“The practical way to think about medical care in this country is to encourage prevention,” said Lucas. “Medical costs are skyrocketing, and treating cancer is not cheap. This is something we can do to potentially bring down the cost of medical care.”

“Disparities in CRC screening have persisted in the African American community, but we have the tools to do something about it,” Lucas added. “If we can do better with detection, we won’t solve all of the disparities, but we’ll take a really big bite out of it. We hear a lot about Black Lives Matter. If Black Lives Matter, then Black health should matter too.”