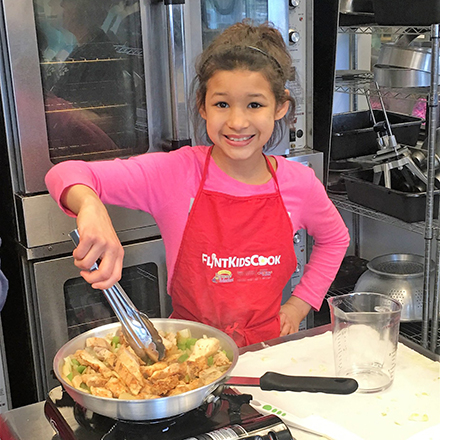 PBS News Hour reports on a number of programs that are working to encourage good nutrition for the children of Flint, Michigan. Triggered by high levels of lead in the drinking water and a public health crisis, how is Michigan State University making a difference?

Pediatrician Mona Hanna-Attisha, associate professor of pediatrics in MSU's College of Human Medicine and Pediatric Public Health Initiative director, was among the first to sound the alarm about lead in the water, explains that the metal is stored in bones and can reenter the circulatory system.

"In periods of, for example, poor nutrition in the future or stress or pregnancy, it (lead) can come back out of your bones into your bloodstream and cause that neurotoxicity all over again," said Hanna-Attisha. "But research, shows that certain nutrients decrease lead absorption: iron, found in lean meat, spinach and beans, vitamin C in tomatoes, citrus fruit and peppers, and calcium in milk, cheese, and yogurt.

That's why nutrition is like a forever medicine. Children need to always have great nutrition to limit the ongoing kind of potential exposure from lead release."

The Flint Kids Cook course is an outgrowth of the nutrition prescription program at the city's two big pediatric clinics, including one run by Hurley Medical Center in the same building as the farmers' market.

Every child who comes here for an office visit gets a food prescription: a voucher for $15 worth of fruits or vegetables. And because the clinic is right here at the farmers market, that prescription can be filled right away.

The 3-year-old program of one-time vouchers given at every office visit is among the first of its kind geared toward children. Michigan State University's Amy Saxe-Custack, nutrition director of the Michigan State University-Hurley Children's Hospital Pediatric Public Health Initiative, had the idea of adding cooking classes as a way to introduce kids to more kinds of produce.

"Virtually everyone told us that the kids were choosing fruits, because they weren't familiar with vegetables, and wouldn't it be nice if we could find a way to get them to sort of accept and eat vegetables more often," stated Saxe-Custack. "Since the class, they're wanting to write the grocery list and they're running through the grocery store and saying, we need this, we need this."

Other efforts making a difference in nutrition for Flint kids include the nutrition prescription program, where fruits and vegetables are prescribed to young patients by their pediatrician. The pediatric nutrition prescription program was expanded nationally in the 2018 U.S. Farm Bill. Managed by the Michigan State University and Hurley Children’s Hospital Pediatric Public Health Initiative, the program launched at the Hurley Children’s Clinic, a pediatric medical facility, located in the same building as the city’s farmers market.