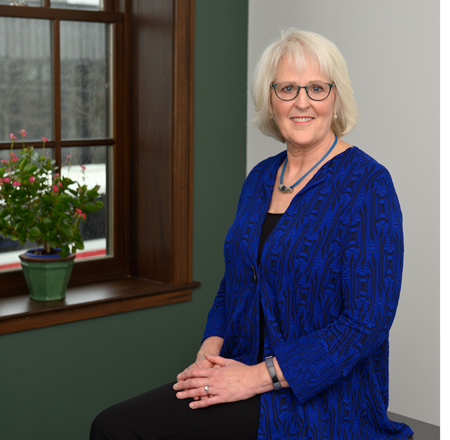 Connie Currier brings 25 years of cross-cultural experience to the Master of Public Health. She spent two years in Africa as a Population Fellow with the Zimbabwe National Family Planning Council.

The young Peace Corps volunteer was shocked and saddened to learn that the women in the remote village of Ghana had to walk 18 miles to get a bucket of water for their families’ daily needs.

It was the early 1980s and Connie Currier was working in the rural health clinics of West Africa. Witnessing events like this inspired her to pursue a career in public health.

“I saw the real depths of poverty and struggle, and people who were making life and death choices,” said Currier, an assistant professor who joined MSU’s Master of Public Health (MPH) program in the College of Human Medicine in 2009.

What she experienced first-hand in that impoverished village made such an impact on her that she clearly recalls details to this day.

“I remember taking bucket baths, going into a store that was completely empty except for a single shirt, and the only food available was the produce the local farmers brought for sale to the weekly market,” Currier said.

But more than anything, she remembers the people and what it meant to be accepted as a member of the village. “I tell students on the study abroad program that ‘it’s all relationships’ in Ghana—and that’s something we’ve lost here in the U.S., that sense of community.”

After returning from the Peace Corps in 1984, she went on to earn her master’s degree in public health in 1988 and worked as a global health consultant in Ghana, Mali, and Liberia for John Snow, Inc., a public health research and consulting firm. She also spent two years in Africa as a Population Fellow with the Zimbabwe National Family Planning Council.

Currier brings to her current position 25 years of cross-cultural experience, which has made her an invaluable member of the MSU MPH team. She coordinates international practicum experiences for MPH students and co-leads a study abroad in Ghana each summer. She has also developed and taught several of the online MPH courses, including Introduction to Public Health; Global Public Health; and Cultural Aspects of Public Health Practice.

She makes the online coursework “real” by sharing stories from her Peace Corps experience in what she calls “Connie’s Corner.”

“One of those stories is about a nearby village we went to visit during a drought,” Currier said. “I recall seeing a woman who had twins; it was evident that one of the twins was thriving and the other one wasn’t. When I went back to that village a couple of months later, I found that the twin who had been thriving was alive, but the other one had died.  It was clear to me that the mother had made a conscious choice.  If she had tried to save them both, they both would have died; but she had to choose.  It was a real “Sophie’s Choice”—the mother had to make a horrible decision, a choice between life and death that no one should ever have to make, but during this drought and under these circumstances it was unavoidable.

“I think about the majority of people across the world who don’t have access to clean water, sanitation, adequate nutrition, or a decent standard of living,” she added.

Most of us take for granted our indoor plumbing and our immediate access to water by simply turning on the tap. Yet, on the other side of the globe, there are people who walk miles every day for a bucket of muddy water.

“We have the ability to address these problems,” Currier said. “We’ve got to be able to do better.”

Currier is a founding member of the Lansing Latino Health Alliance and currently serves as board secretary. She is also a member of the Michigan Public Health Association editorial board.