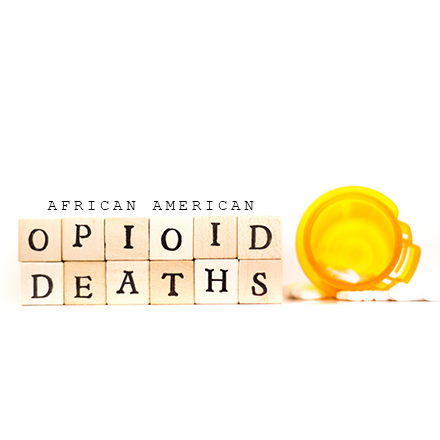 Debra Furr-Holden and colleagues are leading a study that looks at the racial differences in rates of opioid‐involved overdose deaths. Findings from this work call for a need to apply a health equity lens to opioid prevention, interventions, treatment resources, as well as targeted efforts in states with demonstrated and emerging disparities.

The U.S. Department of Health and Human Services (DHHS) declared the opioid epidemic a public health emergency in 2017. And the crisis continues today.

Many experts track the opioid epidemic to the overprescribing of opioids starting in the 1990s. Often prescribed to patients for pain management, opioids are highly addictive. In addition to legal opioids, illegal forms of heroin and fentanyl are readily available for purchase on the black market.

While the opioid epidemic initially affected Whites more strongly, the acceleration of opioid-involved overdose deaths for African Americans outpaces that of Whites and signals a growing disparity. African Americans are now 2.5 times more likely than Whites to die from an opioid overdose.

Multiple factors can explain this disparate increase among African Americans, including illicit drug use, increased probability that drugs purchased and used are contaminated with fentanyl, and a lower perception of risk. African Americans may also be less likely to benefit from resources allocated to combat the epidemic.

Since the introduction of fentanyl in 2013, African Americans are experiencing significant increases of 250% or more in opioid-involved overdose deaths in the states of New Jersey, Indiana, Michigan, Maryland, and Florida.

“For twenty years, we have seen consistently higher rates of opioid-involved overdose deaths in Whites,” states Debra Furr-Holden, PhD, C.S. Mott Endowed Professor of Public Health and associate dean for public health integration in the College of Human Medicine. “In recent years, we have also seen tremendous progress in reducing opioid death rates in this same population. This can be credited to an allocation of resources dedicated to addressing the problem head-on.”

“We know that life expectancy for African Americans is significantly lower than their White counterparts, and there is a limited investigation of underlying mechanisms and structural interventions to curtail these trends,” states Furr-Holden.

These findings indicate a need to apply a health equity lens to opioid prevention, interventions, treatment resources, as well as targeted efforts in states with demonstrated and emerging disparities.