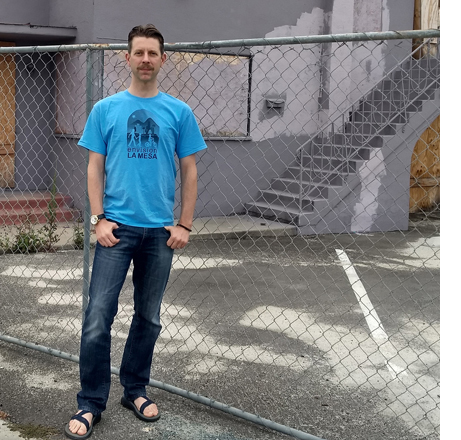 Craig Reed is the director of the Binge and Underage Drinking Initiative with the Institute for Public Strategies. His work focuses on systems change to promote health and wellness, mentoring young public health advocates, and revitalizing neighborhoods in California.

For Craig Reed, Spartan in Public Health, promoting longer, better lives is what it’s all about.

Currently, the program director for the Binge and Underage Drinking Initiative (BUDI) with the Institute for Public Strategies (IPS), Reed is addressing the harmful effects of underage and high-risk drinking by changing community policies, practices, and norms on the over-consumption of alcohol.

His work focuses on systems change to promote health and wellness.

“A lot of our effort is ‘upstream prevention’ as we like to call it and that often means our work goes beyond alcohol-related problems and into related issues like community revitalization, gentrification, equity, and poverty,” he said.

“I’ve always been attracted to the sciences.  As I kid, I wanted to be either an astronomer or a paleontologist,” he said.

Reed began his undergraduate studies in biology at another university. Realizing he was more skilled in communications than lab work, he “hit the reset button” in 2002 and transferred to Michigan State University to begin coursework for his English and creative writing degree from the College of Arts and Letters.

After graduating with his bachelor of arts degree, he began working in public relations at MSU.

Reed says he “blames” his next career change on the medical students he met on the job.

“When interviewing first-year students, and fourth-year students heading to their internships and residencies,” Reed said, “interview after interview, I heard the common refrain: ‘I’m going to help people. I’m going to be a part of the community and make those lives better.’ It started to rub off on me.”

This prompted him to explore a career change—he took a class in medical anthropology and a class in public health. As he began to learn more, public health stood out to him as the more active approach to having an impact on people’s lives.

He began his MPH online coursework in 2010. His practicum focused on the study of federally qualified health centers. During his time in the program, he also held an internship with the Michigan Primary Care Association and gained hands-on experience through various units within the Ingham County Health Department.

After graduating as a Spartan in Public Health, he received two job offers; one locally and one in California. He accepted a position as a program manager with Family Health Centers of San Diego, which he held until 2016 when he stepped into his current position.

Reed recalls one course that piqued his interest. “I was exposed to the topic of environmental prevention. I remember my professor mentioning how the built environment affects health,” he said.

“The idea that not only individuals but entire generations could be affected just by building a neighborhood a certain way really excited me. I began to understand that the built environment is not just physical buildings and streets, but also the policies that we live under and how those policies can promote health—or detract from it. Those are the kinds of things that drew me in; this is the niche that I want to be in.”

At IPS, Reed manages the young advocate’s internship program—through which undergraduate and graduate students gain credit and experience in public health. He describes the program as an opportunity for today’s professionals to pay it forward.

“We customize the program to their needs and interests. Instead of telling them ‘here’s what you’re going to learn,’ they tell us what they want to learn,” Reed said. “I feel it’s important that we start getting students exposed to a variety of perspectives and possibilities of public health early on.”

His community involvement does not end with his paid position in public health.

He is a founding member and steering committee member of a community group called Envision La Mesa, which is dedicated to revitalizing neighborhoods and business districts within the city of La Mesa, California.

“We’re tackling some blight issues,” Reed said. “I love how it brings the community together.”

Reed has also volunteered for PowerMentor; a nonprofit organization focused on mentoring undergraduate college students who want to make a difference through international efforts—such as building wells for communities with no access to clean water.

2009 – Traveled to Zambia to conduct epilepsy and HIV research

2010 –  Joined MSU’s MPH program; volunteer with a medical mission trip to the Dominican Republic (Note: Reed was on the island when the earthquake struck Haiti; his first MPH class started the same week!)