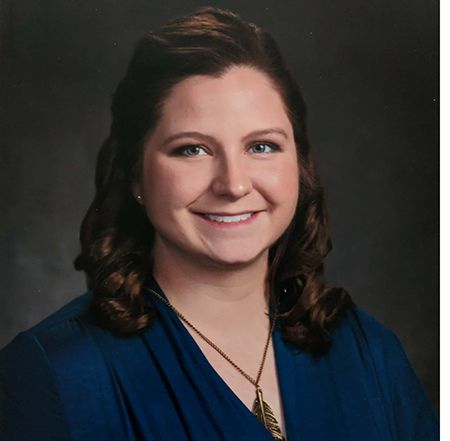 The young girl grew up with a love of animals—which she said she inherited from her mother. The family’s menagerie included two Shetland Sheepdogs, four guinea pigs, two horses and four rescued cats—one of which she’d found as a kitten and smuggled into her college dorm room until she could take him home at Thanksgiving break.

She often assisted her grandfather as he mended injured birds, even though she was terrified of them. She also participated in 4-H and competed on Walled Lake Central High School’s equestrian team, earning a varsity letter her freshman year. And, like most kids, she loved dinosaurs.

Since those early years, Katherine Adwell, Spartan in Public Health, has carved out a non-traditional career path for herself—which includes her passion for animals.

Adwell graduated from the Michigan State University Master of Public Health (MPH) program in May of 2019 —with a dual degree in veterinary medicine. It may seem like she veered off course more than once, but in reality, she is right on track to be an influencer in the area of human and animal health and welfare. Prior to her advanced degrees, she earned a bachelor’s degree in evolutionary anthropology.

“My degree in public health allows me to couple my zoonotic disease education with my personal interest in human culture and community health from my anthropology background,” Adwell said. Her goal is to secure a position that will allow her to incorporate her knowledge of veterinary medicine to mitigate disease transmission and protect populations from zoonoses.

Her MPH capstone project focused on the need for the implementation of universal standards to prevent zoonotic disease transmissions, such as Salmonella, E. coli and methicillin-resistant Staphylococcus aureus (MRSA), between therapy companion animals and the vulnerable populations—such as the elderly and immunocompromised—in hospital and elder care facilities.

“The emergence of zoonotic diseases, such as West Nile and the Ebola virus, showcase that where animals and humans intersect, so will disease,” Adwell said. “Zoonotic diseases not only cause morbidity and mortality in populations but can have far-reaching consequences economically and for animal commerce. With increases in human and animal populations, global travel, large-scale animal movement, and climate change, we are at an increased threat of bidirectional disease transmission.”

The Evolution from Human Medicine to Anthropology/Paleontology
As a freshman on the MSU campus, Adwell initially intended to pursue a degree in human medicine. “But when I took an anthropology class to fulfill a general education requirement, I fell in love with it,” she said. By her senior year, she had developed a deep interest in geology and cultural anthropology, which was confirmed during her research in a fossil preparation lab, where she was responsible for preparing sauropod dinosaur vertebrae for academic study and museum casting.

After completing her undergraduate degree in 2012, she began exploring opportunities for post-graduate work in the field of paleontology and anthropology. That’s when her plans were rerouted once again.

The Evolution from Anthropology to Vet Med
“I realized I didn’t enjoy working with fossil specimens as much as I enjoyed working with live animals,” Adwell said. She realized she could integrate veterinary medicine with her anthropology background and develop a personalized career that would combine all of her interests and skills.

She also learned about One Health, a national collaborative effort in which veterinarians, doctors, and the healthcare community work as one functional unit to integrate the various areas of expertise and skill sets to attain optimal health for people, animals, and the environment.

“One Health has become a major focus in the medical field in recent years. We can no longer ignore that we live in a world where human and animal interaction plays a pivotal role in our health,” Adwell said.

The Final Phase of Evolution: A Master’s in Public Health
Adwell’s undergraduate work in anthropology had earlier sparked her interest in cultural influences on zoonotic disease transmission. When she finally realized she wanted to combine her interest in human medicine and animal disease, the obvious choice for her was to dually enroll in the MPH program.

Adwell encourages other students to keep an open mind when deciding on a career route.

“When I started veterinary school I was not anticipating a career in public health. I would encourage students to embrace the various coursework options offered in MSU’s Master of Public Health program, to explore avenues they hadn’t previously considered and to take full advantage of the diverse spectrum the field of public health holds. The MPH program is so diverse; it allows for careers and opportunities way beyond what you even imagine is available,” she said.

“Michigan State has a long-standing reputation for excellence in both human and veterinary medicine. I am honored to be a part of this legacy and represent Michigan State in my chosen career path,” Adwell said. “And of course, I will always love dinosaurs—no matter what field I am in!”